This post has been written by one of Fosstodon's admins, Kev.

A few days ago, I wrote the following Toot: 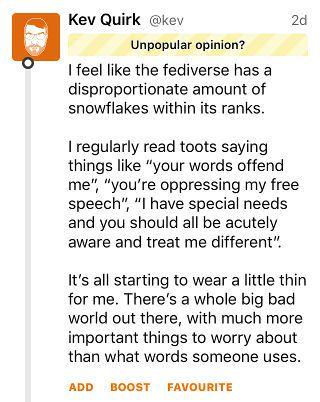 This post caused a lot of upset across the Fediverse it seems, so I wanted to set the record straight in a longer form. This blog seemed like a good place to do it. I was considering putting this post on my personal blog, but because this subject aligns so closely with Fosstodon, here seemed like the better choice.

What is a “Snowflake”?

There appears to be a number of connotations associated with the term 'Snowflake' I was unaware of. In this context, I was only meaning people who I consider to be overly sensitive.

To me, a 'Snowflake' is someone who is very easily offended and will go out of their way to impart their POV on others, whilst simultaneously ignoring every opinion, thought or feeling that contradicts their views.

When I used the term 'Snowflake' in my Toot, this is what I was referring to, and I thought this was the only meaning for the term.

In the reactions to my toot, I learned that many people use the term 'Snowflake' differently. As a long-time Fosstodon member, Brandon (@LinuxLiaison) put it in his blog post about the situation,

this term snowflake is used in an attempt disparage and invalidate the opinions of individuals perceived as being irrationally sensitive. Oftentimes this term is applied to marginalized folk. Marginalization is the act of treating someone as insignificant or peripheral.

I did not realise that. Something else I learned after my toot: polling shows that many people consider the term 'Snowflake' to be derogatory enough that it would impact their mental health. If I'd known that, I certainly wouldn't have used the term. I'm sorry that I did, and I apologise to anyone who was upset.

Why did I write the Toot?

The Toot was a knee-jerk reaction to me getting frustrated by the numbers of Toots that I would personally consider overly sensitive. There was very little thought that went into the Toot, which I think is evident by its content.

What I meant by the Toot?

The point I was trying to make (badly) was I get frustrated by the amount of posts I see where Fediverse members hang other members out to dry, simply because their opinions differ. People can be quick to judge each other as awful, hateful people—even though most people on the fediverse are generally good people, trying in good faith.

In fact, it's something I like about both the Fediverse in general and Fosstodon in particular. Although we all still have a lot of work to do, there are far fewer Nazis, racists, and other hateful people in the Fediverse than on other social platforms. Twitter for example.

Moving from the Fediverse as a whole to Fosstodon itself, I'm particularly proud of the community we've built. As a tech-focused instance, it would be all-to-easy for Fosstodon to have turned into another place for techbros, and left the many, many other individuals who are interested in, and passionate about, technology feeling left out. We could have become just another r/Linux. It's my belief that we've largely avoided that fate, and built a community where anyone interested in tech feels completely welcome to geek out with us, regardless of their background.

To the extent my toot detracted from that community we've worked hard at building, that's deeply regrettable.

Perhaps this 'hyper-vigilance'—the calling people Nazis when they're not—is the price we pay for the community we have. If so, it's probably worth it, though it doesn't reduce the harm people experience when falsely accused of being part of a reprehensible group.

I don't think it would be productive to provide specific examples of the hyper-vigilance I'm thinking of, but I'm sure many have seen this too, and I'm sure you can understand my frustration at the way terms can be over-used.

The Toot gained a tonne of responses; some positive, some negative. Honestly, there were so many that I didn't get a chance to go through them all.

However, of the ones I did read, some were extremely abusive; telling me I should die, calling me names, making assumptions about my past, my life, and even my family.

Anyone who has taken time to get to know me will be certain that I am not a Nazi or a fascist or a racist or any of the other names I was called in the replies to my toot, yet I was labeled every single one of these things.

What I have learned

To me, the overreaction to my Toot was significant. However, that's probably because I know I am not a Nazi, or a fascist, or a racist, or any of those names I was called. I also had the context of what I was trying to say.

All things taken within the context above, I stand by my statement that I feel there are a high number of hyper-vigilant people—that is, 'Snowflakes' (under my definition)—on the Fediverse.

However, Fosstodon is not the place to air those frustrations and I need to keep that crap away from my timeline. It isn't productive, it isn't interesting, and it isn't appropriate.

This is especially true due to my role as an administrator and moderator of Fosstodon. Looking back on it, I can understand how someone who doesn't know me well might read that toot and think, “Oh, Kev thinks that everyone is over-sensitive. I bet if I report this person being an ass to me, Kev'll just tell me to grow a thicker skin.” Let me be clear: that is incorrect.

If someone is violating the Code of Conduct, attacking you, or causing you to feel unwelcome on Fosstodon for any reason, please report them and I, or one of the other mods will look into the situation. We all take moderation very seriously. That's part of the reason we have six moderators spread out across the globe so that we'll nearly always have someone awake and able to respond.

Given my role as an admin and moderator, I need to hold myself to an even higher standard than I hold everyone else. In future, I will try to not post this kind of Toot. I can't promise perfection. I may well say the wrong thing again. It's easy to make a hash of a nuanced position when you only have 500 characters. But I'll keep trying my best.

I have deleted the original Toot. Unfortunately, there is no way to delete the entire thread. I thought long and hard about keeping the Toot up, as I didn't want to be seen as trying to cover my own tracks. I ultimately decided to delete the Toot for all the reasons stated above. By including the toot in this post, I hope I'm making it clear that I'm not trying to erase anything.

The team and I realised that our current Code of Conduct needs work. I believe I didn't break the CoC; many disagree, which I respect and understand. The current CoC is vague enough that many people can have strong feelings about what it means or doesn't mean, and that's a problem.

With that in mind, we will be re-writing the Fosstodon CoC to make it more simple to understand and also to make it less ambiguous. The team will take the first pass at the new CoC and then we will pass it to the Fosstodon Patrons to provide their input before being published.

In some ways, this is a growing pain for our instance. In not very long at all, we've grown from an instance of hundreds to one of thousands. When we were smaller, the formal CoC didn't matter so much. We all knew each other well enough to get along. If I'd have posted this same Toot back then, the only people who would have read it would have known me well enough to know what I was talking about.

I feel that the Fediverse—for all its strengths—has a problem with hyper-vigilance and over-sensitivity. There are genuine problems, and people should call them out (and report them to their mods). But there are also other times when people experience hyper-vigilance and react to a disagreement in opinion as a personal attack.

Or at least that's my view. I understand that many disagree, and that's OK.

I think everyone needs to be a little more tolerant, myself included.